The Chester Sykes Award is our dedication to Employee of the Year. Chester Sykes, founder of LMI Packaging, created this company on the foundation of Six Core Values: Humility, Curiosity, No Limits, Respect, and Giving Back. He demonstrated these values with a core foundation:  No person within his company would feel as though they don’t have a voice. Sykes believed that what you give out will be given back to you tenfold. So, he would go out onto the production floor, taking the time to talk with every employee to see how they were doing. This created an aura around the production floor of importance, that what they were doing really mattered since they were ultimately truly cared for. As Denis Sandecki, our Production Manager, said, “He treated all of us like we were part of his extended family.” This practice that started over 50 years ago is still a key value in the company today. With this in mind, our recipient of the 2021 Chester Sykes Award, our Employee of the Year, is Shane Williams!

Shane Williams, our 3rd Shift Die Cut Lead, has shown a tremendous amount of team effort, exceeding all expectations above and beyond. Being a steady force on 3rd Shift, he’s always ready to jump in when one of the operators is in need of assistance. As a natural leader, he has trained multiple operators and has shown overwhelming support for his team.

“I thought that changing to 3rd Shift would be challenging,” explained an operator. “But he made me feel like the team was welcoming me. He’s taken 3rd shift to new levels.” Shane has a passion for maximizing productivity. His positive attitude and ability to give his all each day has significantly improved the morale of the Die Cut department–and this has not gone unnoticed.

Thank you, Shane, for what you were able to accomplish last year and the moves you will make this year for the betterment of the whole company! 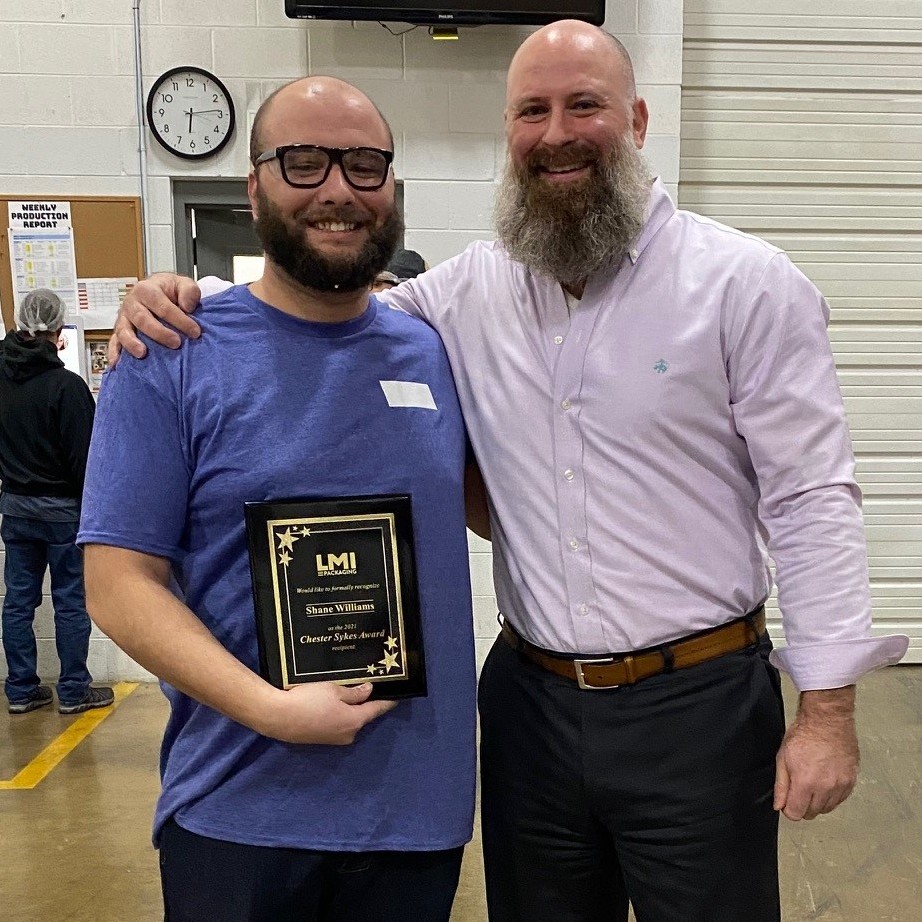 The Vince Incandela Award is our Volunteer of the Year award. LMI strives to foster a sense of community within, emphasizing the impact that charitable actions can have on quality of life and work. Vince Incandela was LMI’s VP of Operations, servicing LMI for 24 years in unimaginable devotion, honesty, and passion. Selflessness, presence, and pushing for excellence were all key parts of Vince Incandela’s goal for people within his circle of influence. His support for others to find their passion in the world of volunteerism was the reason this award was created. Congratulations to Henry Herstedt for being our 2021 Vince Incandela Award recipient!

Henry, one of our on-site Lab Technicians, has been servicing his community since the age of 12. Currently involved as a retiree in his moral organization titled “DeMolay”, he volunteers as an advisor for the generation below him. Modeled after Masonry, the adaptation of the society operates on virtues of Love, Reverence, Courtesy, Comradeship, Fidelity, and Cleanliness. Henry’s service to DeMolay started out as something just to do for fun, but he ended up learning valuable life lessons through his membership. This led to devotion to the cause for the sake of his community.

“Devotion isn’t the right word, though,” Henry said during an interview for his award acceptance. “DeMolay was never a service to me. It was something I truly enjoyed. There’s something about paying forward the lessons I learned within my commitment, something about being a role model for those in the generation below me, that keeps me coming back. I don’t even care if they don’t pay it forward after I’m gone; I’m just happy to give back to the community that gave so much to me.”

Within Henry’s chapter of DeMolay, they raise funds for nearby hospitals, schools, and for the less fortunate. Every year, there’s a different goal for donations; last year, for example, was a rush to gather school supplies for nearby schools in need. His chapter also does community service garbage pick-up, as well as visits to local nursing homes to show respect and give time to those who are sick or elderly. Thank you, Henry, for the work that you do internally and externally for our community!

About the Author: Katie Reif